Research has demonstrated it is not divorce itself which has a negative impact on children, it’s how parents resolve or fail to resolve conflict. The more negative or hostile the interactions between parents, the more harm to children. Mr. Bezinque works closely with his clients to identify the issues involved, focus on those matters most important to them regarding parenting and craft an approach that will, where possible, 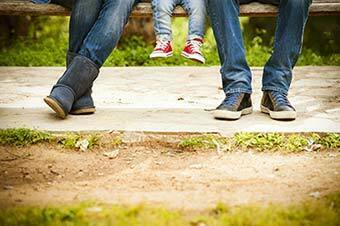 reduce hostilities and produce a parenting plan that fosters an atmosphere allowing children to thrive.

Parenting Schedule – Often referred to as physical custody or a visitation schedule, it’s how the children are dividing their time between both parents’ households. It used to be that dads saw their children every other weekend and Wednesday evenings. Now many judges start with a presumption of a complete 50/50 schedule, challenging attorneys and parents to show why one parent should have reduced time.

Resolution by a Judge – If the parents are unable to resolve parenting issues, decisions regarding children are made by a judge after a hearing where both parents present testimony, evidence and witnesses. Sometimes, an evaluation by a custodial evaluator is used. The evaluator may meet with both parents and the children, and depending on the circumstances have them undergo a battery of psychological tests and interviews. The aim is often to provide a party or the Court with information about parenting styles, conflicts, strengths, weaknesses and perhaps make recommendations based upon the findings of the evaluator.

Ultimately, when the parents cannot agree, the wishes of a parent, an attorney for the child or children or the recommendations of a custodial evaluator are not binding on the judge. Rather, the judge relies on his or her observations of the evidence and demeanor of the parties at trial. The judge determines what is in the best interests of the child or children based upon the totality of the circumstances.

Written decisions in prior cases provide guidance to the trial judge in making the best interests determination, and there are numerous factors that a judge will look into. In recent years, one factor keeps rising above the others: a willingness of one parent to foster a relationship between the other parent and the child or children.